Archives record things long forgotten. American Federation of Arts was a society made in 1909 to first promote American art and then later to invite exhibitions from various other countries. They have been doing it from more than 100 years. In 1947 before the inception of Pakistan, a proposal was received by Chughtai artist for some sort of art cooperation. This was received at his traditional house in Chabuk Sawaran, at that time referral as in India. Sending by Air Mail, meant it was a time sensitive delivery. This is a rare envelope for the society left  Barr building long time ago.

What was the proposal? Not found yet. But certainly the artist was important enough in USA to receive a letter from this society. M.A. Rahman Chughtai had been displayed at various American institutions in 1931, due to activity of his promoter, Dr James Cousins. We have already taken out a blog on same. The tit bit here is an official American contact, as this society was patronized by President Theodore Roosevelt himself. It was in 1951 that Prime Minister Liaquat Ali Khan had gifted a painting of Chughtai artist to President Truman at a state ceremony. Records lead us to the truth of history.

SHARING A WONDERFUL ARTICLE ON CORONA AND THE QURAN

WITH DUE THANKS DR EJAZ RASOOL OF GLASGOW. MUST READ!

No one has touched the Corona pandemic with the dictates of the Holy Quran itself. Dr Ejaz Rasool has written an excellent article on same, which is an objective analysis but still misses no point. We usually do not share articles of others, but this is worth reading by all. We hope it opens discussion and makes us think and ponder as instructed by the Quran itself. Thank you Dr Ejaz Rasool!

Is there a grand plan behind this all? Our job is to remain positive, and face the consequences with true grit. Things pass, nothing remains the same. Bad times will go and hopefully will be replaced by better ones. Keep yourself with your chin high! 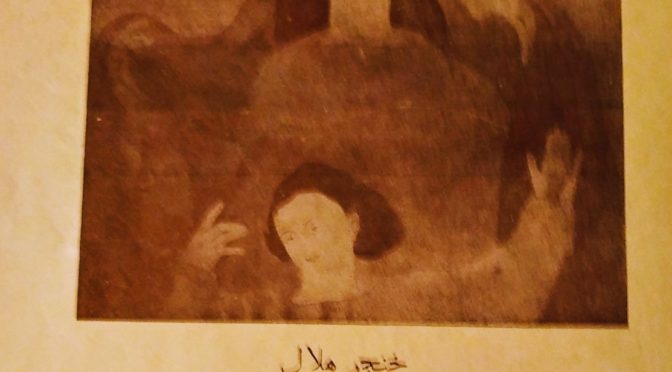 IN MEMORY OF HASSAN YAR JANG, LOVER OF ALLAMA IQBAL AND QUAID E AZAM – AND LOVER OF ARTIST M.A. RAHMAN CHUGHTAI TILL THE VERY LAST (BOOK 1978)

We found out a book published in Karachi in 1978, thirty years after the exhibition in Hyderabad in 1948. Hassan Yar Jang gave all his documents to a friend Abdur Rauf Arooj, and he compiled the book of memories. A chapter is devoted o M.A. Rahman Chughtai too. We have already written about Hyderabad in a previous blog. Suffice to say that not only are there physical links between the two states, but more than ever Ideological links. East Pakistan was crushed under a conspiracy and today everything is openly said how through planned conspiracy the malignancy was done. Similarly Hyderabad’s link with Pakistan was forcibly snatched and in such places, it is evident how they remember the golden rules of yesterday, as compared to the hotch potch rulings of today.

Illiterate and uncivilized leadership anywhere cannot do much for anyone, public or the general run of the country. The start of Nawab Hassan Yar Jang comes from the PAIGAH family, a family only second to the family of Nizam of Hyderabad himself. A lot of Hyderabadi brethren migrated to Pakistan, and we encountered many families, mostly in Karachi. Others migrated abroad, no longer content to be in their country. Even today many Hyderabadis visits us. Our advice be strong and preserve your culture well. Do not forget your past. Perhaps a time will come for Hyderabad to be Hyderabad again!

The War of Independence of 1857 rattled the English. They could never expect what happened to them. Some flukes saved their empire, including help from Lahore, as well as disarmament of Lahore garrison.  The object was simple. To kill all Mughal Princes who could be contender to the throne. So massive assassinations were carried out. In fact many Mughal Princes were not only killed in cold blood, but tortured to death. An evil Englishman has been reputed to have drunk the blood of some of them. Hodson is still remembered with the “Khooni darwaza” as killer of Princes in cold blood.

“There are so many people who claim to be descended. The Mughals were scattered, many ran away from Delhi, to Hyderabad, after the mutiny and no-one knows who went where,”

But of all the persons who claim descent, not one has a face like that of the Mughals or that of progeny of Bahadur Shah Zafar. Yes, it is known that Bahadur Shah Zafar is reputed to have been poisoned to death. And his family erased from the face of the earth. One brother of Bahadur Shah Zafar, and son of Akbar Sani escaped the clutches of the British administration and along with one person and one horse, landed in Chakwal, the area now part of Pakistan. We hear of many descendants of Bahadur Shah Zafar both in India and Pakistan, but the descent is not direct. It is waylaided by different factors. Here is the first claim of direct descent, and even judging from the face studies, the person looks exactly as his fore fathers.  Muhammed Ishaque of Chakwal narrates the various names of his legacy and ancestors, and they are not far fetched at all. His face besides, his attitude is also royal.

Mirza Jahan Khusro, was son of Emperor Akbar Sani, and he was also brother of Bahadur Shah Zafar. He had a son Alam Khusro Bahadur, and both father and son came to the area known as Chakwal. The present person traces his family tree as Muhammed Ishaque, son of Atta Muhammed, son of Saadullah Khan, son of Hayat Khan, and is linked to Alam Khusro Bahadur, and Mirza Jahan Khusro. There seems to be no doubt to this, for this man is not claiming the throne or anything. He is plainly speaking about pride in his ancestry. The many so called descendants in India, mostly do not even look like the Mughals. Here the face speaks for itself. Welcome to additions in Mughal history!

THE YEAR 1923 IS A VERY HISTORICAL YEAR IN THE HISTORY OF LAHORE FORT – PRESENCE OF ENGLISH GARRISON CAME TO AN END AND START OF THOROUGH RESEARCH FROM THE ARCHAEOLOGICAL SURVEY OF INDIA  MR R. HARGREAVES

The Hazuri Bagh was full of occupied British Garrison. In fact the father of E.D. Maclagan, the famous English diplomat, was an Army Engineering Officer, sitting in the structure above the Aurangzebi gate, and occupied the floor there in 1846. Captain Maclagan was doing things, sitting at a place a stone throw away from the Mandir of Loh. But imagine the rest. They had master minded the destruction of the Wall surrounding Lahore. And like the Sikhs before them, ruthlessly tore one monument after the other. The Army was stationed outside Lohari Gate, before being shifted to Mian Meer colony. Now imagine the Lahore Fort, full of British Army, with barracks everywhere. Caring no hoot for anything of historical interest. Breaking things whenever required. In fact in 1923 they said no to R. Hargreaves, Superintendent Lahore, of the Archaeological Survey of India. But then orders came and except for a small corner the whole place was given to the department. Which corner is open to research? All this is in the report of 1924, and we studied it properly. The fort was rescued by Lord Curzon and for him, the entrance was diverted from the main gate, and a new entrance made for his inspection. History is studied with such details.

“In 1923, with the abandonment of the fortress by the British garrison, the Archaeological Service of India, began the work of restoring, repairing, and preserving what remained of the ancient structures.”

Archaeological report of 1924 says the following:

“Before any decision could be reached as to the layout of the archaeological area, it was necessary to ascertain by trial trenches what ancient remains of the Mughal and Sikh period still existed underground. The operations go down and have revealed the existence of a large tank of unsuspected form, some of the fountains of the Sikh period, ruined hammams and other structures of which drawing have been made, the dismantling of the numerous modern additions to the historical buildings have yet to be undertaken. Th chief item of expenditure has been the six-foot iron railing to be erected around the historical area.”

A draftsman copied these excavations in a large number of drawings and these must be in some record office, perhaps the British library itself. Why is 1923 important to us?

The Hindu society Sanatan Dharma Yud Sabha was after the Superintendent Archaeological Survey of India, mainly R. Hargreaves, to excavate the so called Mandir of Loh (only they knew about it), and on 11th December, 1923, the Superintendent with a team of workers went with members of the Sanatan Dharma group to explore this site. It was filled with debris in a deep hollow and for two days, cleaning and digging the area, revelation on 13th December, 1923. And what was discovered were the bones of a GIANT of a person in it. Known as Nau-Guzza in Lahore. And that is a different story, and we will take it up next time. Enjoy solid information, instead of conjectures!

Hassan Din was a technical wizard of Lahore. He was reputed to tackle any technical problem and come up with a solution. He was associated with Mayo School of Arts Lahore as an instructor, but also had ideas of forming a Technical School all his own. A rare pamphlet describes his ideas in 1939. He came from a renowned technical family. His maternal uncle Master Elahi Baksh was associated with the 1911 celebrations of Emperor George V in Delhi. His grandfather was Ustad Chiragh ud din, master designer of wooden works. An old tazia in Karbala Gamey Shah (there even today) was designed by him and his name is mentioned  by Chughtai artist in the preface to the book Amal e Chughtai.

Obviously Hassan Din’s technical solutions depended on his indoctrination and training under exceptional hands. Another cousin Meraj ud din (Paa Maja) was also cousin and best friend of M.A. Rahman Chughtai. The artist spent many hours with these two cousins all the time in exceptional bonding of its time. The relation was basically an emotional one, in which getting together, going to picnics and other places, fishing, flying kites, eating at odd places, viewing dramas and film shows, and mehfils full of jokes and laughter. It was all fun relations at that time. The same are pleasant memories today. Remembering him with love and affection from us! His son worked at Mayo School of Arts for a very long time. Would love to hear from him.