In all ways unique, the manuscript of CHACHNAMA however lacking in completeness or exposure, is the main doorway in understanding the advent of Muslims into the Indian region. The catch word is MUHAMMED BIN QASIM. All history of Muslims before him and after him is avoided to bash his arrival in the region.

The attitude of Raja Dahir is not taken into consideration. It all starts with the capture of some Muslim women, and the Caliph asked Raja Dahir to intervene so that the women could be released. Dahir paid no heed to same. To combat the astrologers prediction that the sister of Raja Dahir would marry a man who would rule SIND, led to a quicker solution  by Dahir. Dahir married his own sister. The Muslims were already traders in the Indian region and were much loved and respected here for their acumen in same. One planned attack had already failed. Muhammed bin Qasim was not expected to do much. Hopelessly outnumbered the Muslim army faced a formidable army of Raja Dahir. Raja Dahir on his white elephant and latest automatic cross bow was picking up soldiers one by one with impunity. One black soldier changed it all. He masked the eyes of his horse and attacked the white elephant of Raja Dahir. The elephant was wounded and fled the battle scene. Realizing that the Raja had gone away, the Hindu soldiers lost their nerve and fled the scene too. And it gave an opportunity to the Muslim army to defeat the enemy. A few days later by the river side, the elephant was found as well as the body of Raja Dahir, where his head was crushed by the Muslims. But that was the beginning. 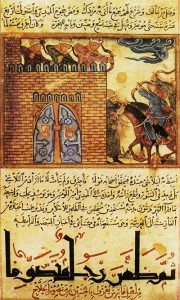 The story generated by Chachnama of the suicide of Muhammed bin Qasim is all wrong for he is found in Iraq, and many references are heard of him. His mausoleum was also in Mosul, Iraq. But the wonderful thing was that the Hindus of Sind so much loved Muhammed bin Qasim that after his transfer back to Iraq, the Hindus made a full size SCULPTURE of him and put it in the chowk of the city in his memory. No one tried to convert the Hindus. The community themselves embraced Islam with time. All this is recorded by historian Baihqi, and can be read by all. And the most wonderful thing is that of his two known sons, one son UMRO was made Governor of Sind and ruled Sind for many years. You do not pay such homage to a conqueror, you make these rules for a hero and Qasim was a hero of Sind, for he had released the local people from the tyranny of a malignant Raja of his times. Usurped his own people all the time. Various research articles have appeared on this from time to time and as people have no access to them, their research is without documentation, only to please foreign lobbies, by changing historical narratives. Enough!

And read about his wife LADI here: