A ship wreck in Rann of Kutch

The Hindu epic Mahabharata talks of the sacrificial HORSE in Bhadeswar, known as Bhadervati, and that is certainly an ages old reference. The legend continues that all thoroughbred horses of India and Pakistan belonged to this dry sandy area of Rann of Kutch. And it was called Kachacha at that time. And this news is not exclusive, it remained the folk lore of all ages. 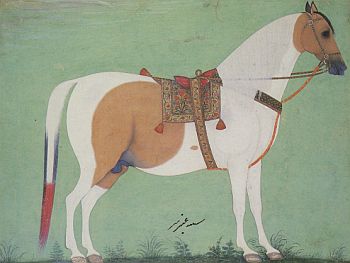 The legend has it that an Arab Ship got wrecked on the coast of Ran of Kutch (Wars were fought here in modern times too). There were seven thorough bred horses on board. These ere rescued and from it, mating done with others. The result a lineage of thoroughbred Arab horses sprung into the region. Abu-Fazl at the Court of Emperor Akbar could relate this tale, and the details of it. It means that centuries later the legend was still intact. Other historians have talked of the same too.

Historians think that the ship wrecked on Rann of Kutch was a Shimali ship, or a ship of Ismaelis. That may or may not be the case, but the Shimalis were happily co-existing with the Jains and Hindus of that period much later in time. So the horses could have belonged to the Ismaelis. It may or may no be so! But here is one other aspect worth considering. The Ismaelis have always been in love with horses. The sacrifical horse mentioned in the Mahabharata and the horse used in the Shia rituals of mourning are already history, but there is more. The esteemed Agha Khan has always been a lover of horses and horse racing is literally in the blood of generations of Agha Khans. You see the Agha Khan horses racing in international events and winning races. In 1938 the famous horse SULTAN of Agha Khan was a Derby winner in England. So horses and Ismaelis are really hand in hand with each other.

Obviously the region was invaded by various parties over a long period of time. They brought in their horses and various breeds, inter-bed and resulted in the horses we see today. The Mule itself is an experiment of horse breeding of the region.

In Lahore we find the horse as a motif used by various potters over the centuries and various figurines of horses have been discovered with time. The figurines itself are a novel way of studying horses of Lahore, and a separate blog can be written about them. The aesthetics of horse design shows the technicality of horse breeding itself. It is interesting that M.A. Rahman Chughtai always lived from centuries in the Mohalla of Chabuk Sawaran in Lahore city, and by chabuk-sawaran we mean literally horse-riders of Lahore. Strange coincidence!