The British took over Lahore formally in 1849 AD. In 1850 AD Ayodia Prashad was the Tehseeldar of Lahore and was asked to conduct a detailed census of the city. It is not for us to state every fact and figure of the census but some facts are very interesting. For instance:

Total population of Lahore around 82,000 only.
Total Income of Lahore One Lakh, thirty one thousand, nine hundred and sixty-six Rupees only.
Total Muslims 46,695 only.
Total Hindus 32,109 only.
Total Sikhs 2501 (And some people think of it as a Sikh city).
Hardly no Christians, Parsees, Buddhists, or even any Bengallis. Few Europeans only.
Total shops in city 28,694 only.
Total elephants 54.
Total camels 318 only.
Total horses 1595 only.
Many Professions represented, including Painters and Architects.
Total Madarassa (schools) 143 teaching mostly Arabic and Persian, and that does not include hundreds of basic educational wings attached to mosques. Even Hindus and Sikhs were learning Persian and Arabic in these schools.
Prostitution spread all over city, but mainly Anarkali area. No Hira Mandi in operation.

A very interesting incident is narrated of a Prostitute in Anarkali singing a song of having no access to her lover. A British sepoy was passing who knew the local language too, and went up to her house, to tell her not to mourn non access to her lover. There were many means for communication. She could send a letter by post, use the telegraph near the Railway Station or go to her lover in actual terms. The people in the bazaar of Anarkali burst out in laughter, for the Sepoy had not realized that the song was an advertisement to lure or seduce some passerby and the sepoy did not get the actual terms. Historical incidents have their funny aspects too. 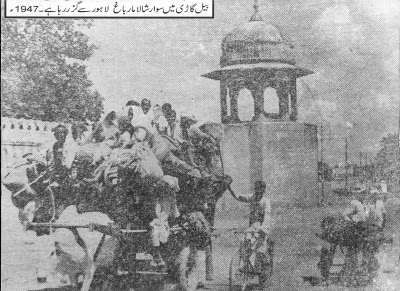 The number of Muslims prove the fact that Lahore in its span of more than a thousand years was a Muslim city and Muslim Culture predominated here. More on that later.