CROSSING A ROAD IN STRAIGHT LINE
MAKING CHOICES IN LIFE!
The proportionate way results in miracles 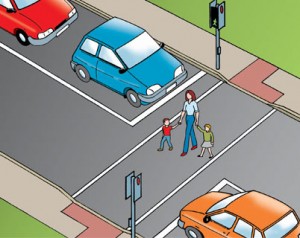 Living in Lahore, the first thing we face from morning till night is traffic. It always seem that the world has gone crazy. I have driven a car in this city all my life. And every year I see the ruin of traffic. The policemen who were there for traffic were replaced by fancy traffic wardens. Not one of them are bothered about the plight of people, except to pave smooth way for their Masters, skulking in and around Lahore every day. The Khadim Aala square is best managed, but only for the Khadim Aala, no body else. The cars are driven by paindos (villagers), who have come into the city, after driving cycles in their villages, or donkey carts for that matter. The car can zig zag like a rabbit in any direction, even the opposite one. No one stops at the red light, no one goes at the green light. They are all in some thinking melee of the times. The motor cycles are driven as my uncle used to say, ‘Sitting on one coming out of their mother’s womb and going back sitting on a cycle’. Not a second to get down. A truly lawless reckless way of moving about. And the cycle rickshaws and the rickshaws, and the vans, and even the buses. All hell broken loose!
But what bout the person walking on the road. If not jaywalking, he too is strolling on the roads like a park. Afraid to move forward, afraid to move backward, cartoon like antics. Accidents occur all the time, most of the time.

We are all Muslims and we have read the Quran. Even translations. Every city has a gateway. The Quran itself has a gateway. It is a ‘Surat’ and it is called Sura Fateh. It explains the whole Quran in a crux of literally few lines. Dr Syed Abdul Wadood has given us the most modern translation, explanation of same in some words. The Quran tells us to chose the PROPORTONATE WAY in life. To evolve towards a position that Allah intended for us. Let us then read the Sura Fateh to understand all this:

PONDERING OVER THE BEAUTY, PROPORTION AND PERFECTION OF THE LIVING AND THE NON-LIVING OBJECTS OF NATURE, EXCITES IN MAN A VOLUNTARY PRAISE OF THE ONE WHO SUSTAINS EVERY COMPONENT OF THE UNIVERSE , FROM ITS INITIAL STAGE TO THE STAGE OF ITS FINAL DESTINATION; BY PROCESSES OF SLOW, GRADUAL AND ASCENDING EVOLUTION, INTERRUPTED OFF AND ON BY SPONTANEOUS REVOLUTIONS.

THE SUSTENANCE OF HUMAN BODY IS A GIFT FROM ALLAH, BUT THE NOURISHMENT AND DEVELOPMENT OF HIS PERSONALITY IS SUBJECT TO THE DEEDS HE PERFORMS, THE RESULTS OF WHICH ARE UNDER COMPLETE CONTROL OF ALLAH’S LAW OF REQUITAL, IN THIS WORLD AND THE HEREAFTER.
(OUR RABB!) WE BOW DOWN TO YOUR LAWS FOR THE DEVELOPMENT OF OUR POTENTIALITIES, BY USING OUR CAPABILITIES FOR THE BENEFIT OF HUMANITY, AND WE SEEK YOUR HELP IN SHAPING OUR LIVES WITHIN YOUR PRESCRIBED PATTERN.
GUIDE US TO THE STRAIGHT PATH WHICH LEADS TO OUR DESTINATION IN THE HEREAFTER.

THAT IS, THE PATH OF THOSE PAST NATIONS WHO STRIVED IN CONSONANCE WITH YOUR LAWS AND WON YOUR FAVOURS, ON WHOM YOU BESTOWED POWER ON THE EARTH WITH ALL ITS POMP AND GLORY, WHOM YOU RELIEVED FROM THE BONDS OF TYRANNICAL RULES, WHOM YOU GAVE SUPERIORITY OVER CONTEMPORARY NATIONS OF THE WORLD, AND WHOSE NECESSITIES OF LIFE YOU FULFILLED, PROVIDING THEM A PROSPEROUS LIFE OF PEACE AND PLENTY.
THEY WERE NOT THE PEOPLE WHO HAD DISOBEYED YOUR LAWS AND CONSEQUENTLY CAME INTO THE GRIP OF YOUR LAW OF REQUITAL WHICH GAVE THEM SLAVERY, MISERY, HUNGER, HUMILIATION AND DESTRUCTION.

NOR WERE THEY THE PEOPLE, WHO WERE LED ASTRAY BY FOLLOWING THEIR OWN BASER SENTIMENTS OR BY FOLLOWING OTHER SELF-INTERESTED AND WRONGFUL PEOPLE, LIKE THEIR CHIEFS AND ANCESTORS, AND THUS FELL INTO HARDSHIP AND MISERY.

This is the crux of the Quran. We read it every day and we hardly understand it. And those outside our culture to whom Quran is an enigma, read this and you know the meaning of the Quran. So when you are crossing the roads, remember the Quran and walk a proportionate way. Make it an habit, and see what happens. The miracle by which Nations are made!

One thought on “CROSSING A ROAD IN STRAIGHT LINE MAKING CHOICES IN LIFE!”