‘SOB’ SON OF BITCH
AND OTHER ABUSES

History of abuses in Lahore 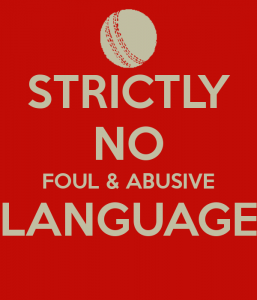 The differences between men is natural. And when men get hot over issues, the first step is the hurling of abuses. The history of abuses carry with it the social values of any given society. Civilization requires that the abuses be contained, and emotional outbursts require catharsis provided by them.

The most ancient abuse in Islamic society is of course the term ‘JAHL’, and it comes from the word ‘jahalat’, and that word comes from our natural misfit ‘Abu Jahl’, the man who would not accept the prophethood even till his last breath. To any Muslim, there can be none inferior than that, and comparison to him is the ultimate derogation. The next ancient abuse we accost is related to ‘HARAM’, that is illegitimate, and from it we refer the term ‘Haramzada’ and ‘Haramzadi’. That simply is the equivalent of the English word ‘Bastard’. Another traditional abuse is ‘BAYZAT’ and that means someone without any race. Then we have the references of ‘SOOR’ and ‘KUTA’, that is equivalent of being a pig or a dog. And from it comes ‘Soor da putar’ and ‘Kutay da putar’. One is ‘Son of a pig’, yes. Then of course is the English abuse ‘Son of a bitch’, but interestingly there is gender inequality here, for we never hear of ‘Daughter of Bitch’. Strange bias here!

Then we have the female abuses here. The common ones are Kameeni, Kuti, Soorni and Kanjri. That means simply a Spendthrift, a Bitch, a She-Pig and last a Prostitute.

Calling a man a ‘KHUSRA”, that is an ‘eunuch’ is also used. But more and more we hear of sexual references in abuses. Two very Punjabi words (‘G…..’ and ‘B….’) used in our language refers to the ‘PANSY’ or ‘FAGGOT’ in English terms. We need not repeat them here, as everyone understands them. That is a natural passive homosexual. Again affront of man’s sexuality. We also have references to the size of the male genitals, as ‘Chota’, literally something small. The  American comic of previous generation Dora,  ‘Little Lulu’ provoked a big laughter here for in local terms it meant small genitals.

The Sikhs contributed to the derogation of Lahore’s culture by inducting many kinds of abuses here. Abuses referring to sexual intercourse with the mother or the sister or the daughter, is commonly abused to this day. There are no Islamic antecedents to this kind of abuse. It is very Punjabi and very Sikh in character, but abused all the time to this day.

The abuse SOB or ‘SON OF BITCH’ is very interesting. These kind of abuses came with the British rule, but the strange paradox is that the Westerners who love DOGS and BITCHES, should use the term as a derogatory remark. In a culture where zyphilia is present all the time, it shows disregard for love of the animal. When and how a BITCH became a bad reference is not known? But it can be deduced that the bitch shows no reverence fondness for any mate. A number of dogs pursue her and she copulates with one of them. This loose character of the bitch warrants this kind of abuse. Other animals who select their mates are not counted as abusive material.

The American abuses abound here nowadays with American literature, movies and serials abounding around us. The four letter word ‘F…’ is common here today. I need not trace the etymology of any. Those are well known internationally. So the four letter words are there for the Brown Sahibs and the local Mother Sister abuses for the general public. But to me my favourite is “JAHL’ and I see so many of them around, particularly in Governmental circles. Our politicians are born jahls and will remain jahls for the rest of their lives.

One thought on “‘SOB’ SON OF BITCH AND OTHER ABUSES”