PATANGS FROM MALAYSIA
INSPIRATIONS OF THE LAHORI PATANG

There are many traditions of Kite flying in the world. No culture has shape of the Lahori kite. The only traceable influence is of Patanga from Malaysia. There is a load of knowledge about them and we have to see how the influence came to be. Let us first see a Malaysian patang and discover the reasons for same. 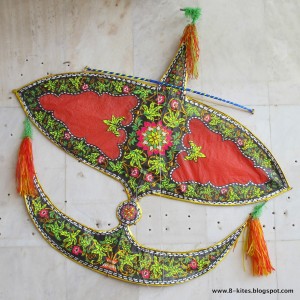 The Wau bulan kite is a typical Malaysian kite.  The one layer of paper sail is richly decorated with colourful patterns of flowers and leaves. The patterns are meticulously cut from rice-paper and glued on piece by piece. The framework is made from split bamboo that was soaked in mud for two weeks ( to make it ore flexible and to prevent attacks of weevil). The normally attached hummer give a constant noise
The Wau is also one of the Malaysia’s national symbols; We noticed it on the Logo of the Malaysia Airlines, on the one ringgit banknote and on the reverse side of the fifty-cent coin and at the central market of KL.

We see that there is resemblance but there are differences too. The differences are not that many but are related to the type of winds in Malaysia and the type of winds in Lahore. The Lahori patang is an evolution of the patangs from Malaysia. The Lahori patang is not made of RICE PAPER, but of GUDDI KAGHAZ and that is why its shape can be different and in all ways, it can go so far away, as to touch the skies themselves. Most Kites of the world have a limited span of flying distance, but not the ones from Lahore. We have seen them recede into the skies all the time, at times even clouded by the clouds themselves. Here we have to seek references for same.

There is a reference in a travelogue of a Britisher in Lahore, in which he tells us about the celebrations of Basant by Ranjit Singh. With this he adds an interesting thing. He saw the ridiculous way the young boys ran after the CUT KITES in the sky, with DANGS (long bamboo sticks) in their hand. A practice which was seen to the day that RAW started the campaign against Kite flying in Lahore, and ruthlessly brought it down, with use of their own agents in the bureaucracy of Pakistan. More on that later.

Nur Ahmad Chisti was a prolific writer of Lahore, and in an unpublished manuscript (which Imtiaz Ali Taj Sahib later saw it in print), he narrates BASANT IN LAHORE around 1850s AD. The most interesting thing in his writings is that although he talks of so many details about the festivity of Basant in Lahore, in no way he relates it to the ACT OF KITE FLYING at all. At some other place we will write about the details of Basant in Lahore, but it was more of wearing Yellow clothes. Chisti says that Basant happens in Lahore like in India on the 3rd of Jamad ul Sani, and the festival is of many days. The routine is presence of people at Mazars of Saints and graves of their loved ones. In Lahore Basant was celebrated at the Mazar of Madho Lall Hussain, and both Hindus and Muslims used to celebrate Basant there, as Madho and Lall Hussain were two lovers of medieval times and that is a separate story in itself. Chisti talks of the prejudice of the Hindus who shifted their Basant festivities to the Samadh of Haqeeqat Rai and left the Muslims in lurch. The Muslims started assembling at the Sarai of Muhammed Sultan Tekaydar. Mind you, no reference of kite flying at all. And there is the first sign that Muslims not knowing how to celebrate Basant, mixed it with kite flying and started a new trend in Lahore.

Chisti tells us of this SPECIAL GROUP OF KITE MAKERS ANDFLYERS in a separate note and does not relate it to Basant. He says this group of people make and sell kites in Winter, and in Summer, they make bamboo cages and trap and sell SURAQS that is Red Robins of Lahore, who actually migrate here from Russian areas to this day. Suraqs and choomonas (bird rearing) is another passion of Lahore, and Suraq fighting is there to this day as an entertainment. An impossible task to train the little red bird to fight with another red bird, often to death itself. There is every possibility that this group of people had migrated to Lahore from other areas, and may have been gypsies of some order. The link of this gypsy group may be linked to Malaysia itself. But that is a separate research experience. All this analysis is being DONE FOR THE FIRST TIME IN HISTORY.

One thought on “PATANGS FROM MALAYSIA!”