A SULTANATE LAMP OF LAHORE
FILLING GAPS OF RESEARCH

It is a fascinating study to note the changes and development of shapes as a thing moves from one region to another. Obviously there is a harmony in Islamic Art everywhere, but the regional changes are always there. The Taj Mahal is based on prototypes in Herat and Samarkhand but in Agra at the hands of a Lahori architect, it developed a shape all its own. A butterfly defecates the individual flowers of the area. A honey-bee produces honey which is related in taste to that area alone. 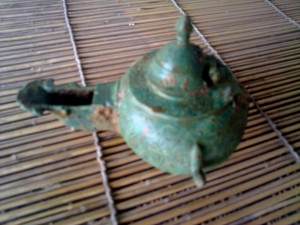 Why lower placed domes become bulbous domes in another area is worthy of study? Of course the Euclid principles were there and designs based on geometrical equations were natural to those people. Some critics openly state that artists and architects are inspired by the aesthetics of womanhood, and as regional area houses women with larger bosoms, so did the heavy bosom had an effect on the shape of architecture too. A study of the Sultanate lamp of Lahore shows the same bulbous shape which characterizes this area. Although the naqashi on it as well as Fake Kufic script is still there, the over all shape is different to this area. But there is no doubt that it is an Islamic lamp with Islamic aesthetics woven in it.

Cultures do not clash, they actually intermix and form adaptations in the results. The architecture of the Hindu temples started using domes,  arches and gateways and naqashi designs of the Islamic buildings. The Sikh Gurdawaras are all Islamic in nature. Even the Samadh of Ranjit Singh is an Islamic design. The Golden Temple is an Islamic design, and many Muslim Architects are known by name, who worked on it. Even after the demise of the Sikh Maharaja, the people working on it were Muslims. Sikh testimonials record for instance the working of a few Muslim mimars of Amritsar (all real brothers), including Elahi Baksh Mimar.So the new culture is a welcome sign to aesthetics. 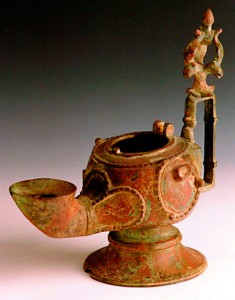 Dr Tara Chand wrote a thesis on Islamic contribution to Hindu Culture. Nowadays no one dares to even use this nomenclature as their topic.  A study of local culture even today shows the shortcomings of its environments. When a new stimulus is given to jaded ideas and thoughts, a new flower is sprung into existence. Natural Selection of Charles Darwin is replaced by Cultural Selection of modern man. The Buddhists from Central Asia enriched this area. The Mongols did the same. And the Turks brought new life into the region. Whatever the political reasons for debunking this contribution, it has stood the test of time and it cannot be in any way denied by any one. M.A. Rahman Chughtai once said that if a survey is taken of the reason of the abundance of tourists to this region, we find that the Mughal monuments are one of the biggest attraction which make them come here. The Taj Mahal  heads such a list of want to see monuments. So do not in any way undermine the contribution of Islamic Civilization to this region.