The palace was built in 1121 by Mas’ud III (reigned 1099-1114), son of Sultan Mahmud of Ghazna, on a site to the southeast of the walled Ghaznavid capital. It suffered many calamities, from being burnt down to actual demolition by the Mongols of Genghis Khan. Incredibly the ruins were excavated by an Italian team, but to no avail, as the Afghan war inflicted further damages to the site.

“The excavated foundations show a palace with a roughly rectangular outline, its corners placed roughly on the cardinal axes. Fortified walls of 120 to 150 meters in length enclose the palace and a bazaar street located to the its northwest. The bazaar, which spans the entire length of the palace, is entered from gates located at either end (northeast and southwest), and contains the palace portal. The portal opens into the northwest iwan of the palace courtyard. Thirty-two meters wide by fifty meters long, the courtyard is enveloped by four central iwans and thirty-two arched niches. The grand iwan to the southeast leads into the throne room, which has an oblique rear wall abutting the exterior wall of the palace. An inner courtyard, entered via a passageway from south corner of the courtyard, adjoins the throne room to the southwest. The hypo style palace mosque was excavated at the western corner of the main courtyard. It is three bays wide and five bays deep and is entered from four niches along the southwest courtyard wall. Its interior walls were built at a slight angle with the rest of the palace in order to align with qibla.”

And its description is further told to us as:

“The walls of the palace courtyard were adorned with an exceptional marble dado, consisting of an estimated number of 510 panels around the courtyard, each about 70cm high. The panels formed three distinct bands. The wide central band contains carved arabesques on a floral entrelac and sits above a narrow band of interwoven scrolls. A narrow band of floriated Kufic script tops the dado. About a tenth of the panels were found in situ during the excavations, allowing a reading of the Persian inscription. Composed in the mutaqarib meter, the verses offer praise to Masud III’s predecessors and in particular, to Mahmud of Ghazna. The letters were originally painted in lapis lazuli blue, with a red or gilt background. A marble footpath, about five meters wide, encircles the courtyard below the dado.”

Many of the items recoverd were later stolen during the Afghan crisis and it is unknown where they exist now. The Afghans are really famous for this kind of plunder and could have sold them anywhere in the world. Western collectors offer much higher prices than third world countries, otherwise many could have landed in Pakistan itself. I remember a complete graveyard tombs with stone inscriptions were offered for sale here. No takers of graves however.

There is a detailed account of the Prince and the Architect in the History of Bayheki, and we reproduce the whole page of same. The personal interest shown by Prince as well as his mathematical calculations are told to us and the enormous amount of money spent on it. The interesting part is the designation as Muhandis and Naqash. It seems instead of the term Mimar, this was the term in vogue at that time. In fact this term is also used for Lutufullah Ahmad Muhandis of Lahore in the 17th century. Also descendant of Ustad Yusuf Burkurwdar Herawi of same place. Read: 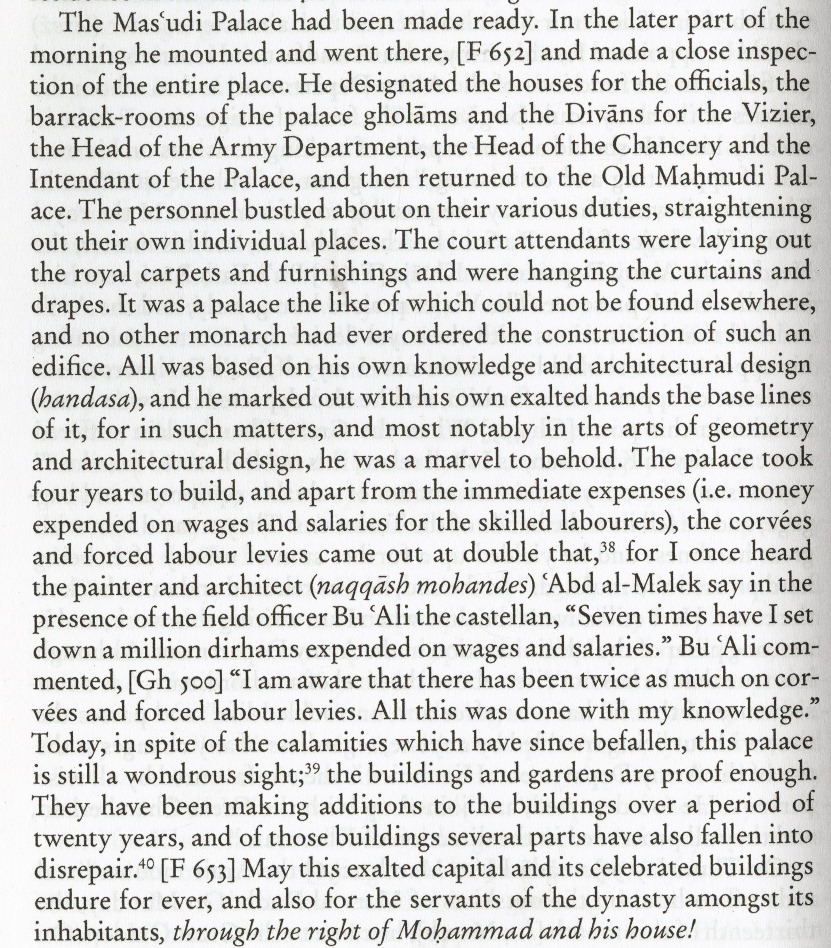